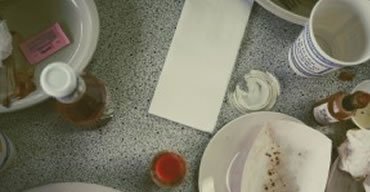 Food waste is a growing problem in our increasingly waste-conscious society. And it isn’t just the wasted foodstuffs that is the problem; it’s the extra packaging and energy that go into them.

One food waste problem that has so far proved impossible to solve will be familiar to anyone who likes tomato ketchup.

How do we extract the food products that get stuck in hard to reach corners of their packaging and refuse to come unstuck?

This is a problem with viscous foodstuffs like tomato ketchup and sticky products like paint and glue.

But now scientists from the Massachusetts Institute of Technology (MIT) think they have solved the problem with a thin slippery coating that can be applied to the inside of packaging to help reduce waste.

We all know the frustration of trying to coax the last bit of tomato ketchup out of the glass or plastic bottle.

Whether it’s a smooth hit to the base of the container, a good shake or an old-fashioned knife up the neck of the bottle, everybody has their own technique for extracting the red sauce.

But while it might sound like a bit of fun, there is a serious element to this problem. With a product like tomato ketchup, anywhere between 5 and 20% of the product is typically wasted because users can’t extract it.

And this isn’t just a waste of the product, it is wasting plastic used to hold the liquid and the energy that is used to make it.

Known as ‘Liquiglide’ the MIT solution is a solid-liquid composite material that can be applied to the inside of plastic, glass or metal to make it more slippery.

The makers have already identified dozens of products that they think will be improved by the material including paint containers, toothpaste tubes, shower gel bottles and, of course, ketchup bottles.

The technology’s co-inventor Dr David Smith told the BBC that it could have a significant impact on waste.

“With the manufacture of these sticky products there is about 200 million gallons of material each year that gets stuck to tanks and then gets washed off and thrown away. And in packages there are about 40 billion packs with material stuck in packages so the technology has the potential to significantly reduce waste,” he said.

Liquiglide says that the coating is ‘completely harmless’ and meets safety standards because it “can be made entirely from food”.

It is already being used for some applications like paint containers, but the company expects that in a few years’ time the technology will be used widely in the food industry.

Why is it ketchup hard to get out?

There is some science that explains why some liquids like water flow out of containers easily, while others like ketchup and mayonnaise are more difficult to control.

Common liquids, such as water, alcohol and oil, respond to force linearly.

If you apply twice the amount of force then they will move twice as fast. This was a theory put forward by Sir Isaac Newton so these are known as Newtonian liquids.

But ‘non-Newtonian’ liquids like blood, mayonnaise, paint and peanut butter do not respond in the same way to force. Their thickness changes depending on how hard, fast or long you apply force, according to aÂ TED-Ed video.

From a physics perspective, ketchup is one of the more complicated mixtures out there; it cannot decide if it is a solid or a liquid.

Ketchup will generally behave as a solid. But if you apply a certain amount of force then ketchup will quickly change to a liquid state and splatter over your food.