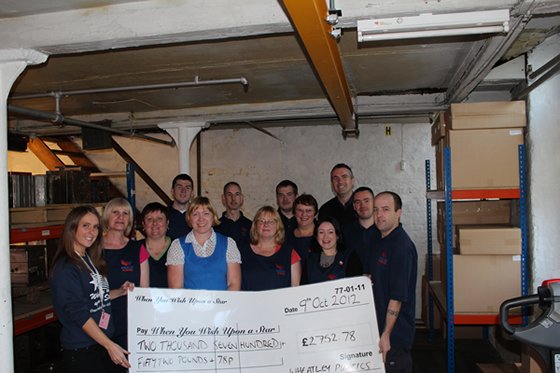 Throughout 2012, Wheatley Plastics has been hosting a number of fundraising events to help support the Charity, When You Wish Upon A Star.

The primary aim of When You Wish Upon A Star is to grant the wishes of children suffering from life threatening illnesses. The charity receives letters from parents of sick children from all over the country as well as a great number of referrals from hospitals and hospices. So far it has granted over 14,500 wishes for some very brave and courageous children and their families, providing them with precious memories.

Our fund-raising commenced with the Manchester Marathon in April, when Managing Director, Gary Knight, put on his running shoes and ran 26.1 miles in the worst weather Manchester could throw at him. Thanks to the support of many of our customers and suppliers, we raised almost £2,300.

We were off and running, quite literally! This went on to inspire the team to pick up the baton and think up other fund raising ideas.

Next came Euro 2012. Tool Setter, Kevin Boden, came up with the idea of doing a sweepstake. We were all allocated a team for which we paid an entry fee. Half of the money went to the holder of the winning team and the other half went to the charity. This raised another £80 for the charity and a good bit of fun and rivalry in the work place.

Production Operative, Rosa Sheridan, offered to do a car boot sale, with everyone donating items for her to sell and all the proceeds going to the charity. After being rained off several times (the summer was not the warmest or driest on record) Rosa finally got up at some early morning hour and hosted the Car boot sale, which raised £185.60. Not content with this Rosa took charge of selling wristbands and key rings for the charity and proved to be an amazing salesperson by raising £62.00.

Our last event of 2012 was the Premier League Dream Team, which appears in one of the national newspapers. Any employee who wanted to join, created their team, as per the rules of the game, and collectively these teams formed the Wheatley Plastics league table. An entry fee was set with the proceeds going to the charity and Wheatley Plastics put up a prize fund for the staff. This resulted in another £150 and took our total donation up to over £2750.

Our fundraising efforts will pay for 5 children, from the Stockport area, to go to Lapland this Christmas and have a truly amazing day to remember.

For this, we would like to say a big thank you to all our sponsors, staff and everyone who helped us to achieve this fantastic target.

A truly Inspirational Effort by All